Solution #1. Catalyze The Premier Hard Tech Collaborative R&D Cluster.  21st Century innovation initiatives generally focus on the emphasis of local, geographically concentrated “ecosystems” whose constituents or “stakeholders” share, and make available to others, their respective research, assets, facilities and skillsets.  The objective of these innovation clusters is to provide concentrated points of coalescence to marshal and organize assets in order to establish a stable, long-lasting local environment conducive to supporting continuous innovation across entire communities for the benefit of all stakeholders.  Research has revealed that, when executed effectively, these “innovation clusters” impart special, outsized productivity gains – known as the “geographic multiplier effect” – to their stakeholders.

TI  believes that it possesses the unique relationships, skillsets and abilities to serve as the primary coordinating intermediary in the establishment of an internationally renowned Hard Tech “supercluster” linking together existing hard technology clusters to the East and West of Houston – with the Velasco site (“Velasco” or the “Site”) serving as its primary point of coalescence.  Although the broad benefits of such a cluster initiative are well established, researchers caution that such cluster initiatives of this kind cannot be established in any location.  Rather, they require a curated combination of skillsets (e.g., intermediaries, suppliers, service providers, entrepreneurs), institutional supporters (e.g., community, governmental, academic, corporate) and proximity to existing clustering activity (see Figure 5).

In short, TI’s goal is to transform Velasco into both the physical and symbolic focal point establishing Houston’s role as the leader in 21st Century Hard Technology Collaborative R&D initiatives. Maximizing collisions between engineers, scientists and technically degreed entrepreneurs is one of the key interaction points of an innovation eco-system that enables outcomes greater than one individual’s effort, as referenced by Tony Hsieh’s Delivering Happiness Publication from his experience with the Downtown Project in Las Vegas, NV.

As discussed, the growing phenomenon of crossover R&D spending (e.g., automotive companies’ R&D spending on energy initiatives) presents an exceptional opportunity for Collaborative R&D (e.g., energy companies and automotive companies splitting costs, mid-sized suppliers in the energy industry contributing subject matter expertise to a particular industry led R&D initiative, etc.).  Velasco’s proximity to Houston’s urban core, central business district, upstream location from Houston’s ship channel, universities, research institutions, and corporations, as well as its unique geographic dynamics (e.g., see Figure 5) are unlikely to be replicated in or near any major urban center for the foreseeable future, providing a durable competitive advantage to stakeholders in Houston relative to other cities aspiring to duplicate and/or displace Houston in the development of these next generation technologies.Upon completion, Houston will form the core of one of most tightly concentrated, self-contained and defragmented Hard Tech superclusters in the world, with one of the densest configurations of Hard Tech human capital, research assets, governmental institutions and businesses in the region.  These favorable – and difficult to replicate – dynamics are likely to serve as a nationwide beacon for researchers, entrepreneurs, and business owners in search of the perfect city for their Hard Tech initiatives. In fact, one of Los Angeles’ ecosystem engineering director and former Kauffman Foundation Global Scholar has entered Houston to team-up with Alex Rozenfeld that resulted in co-founding Texas Innovates. 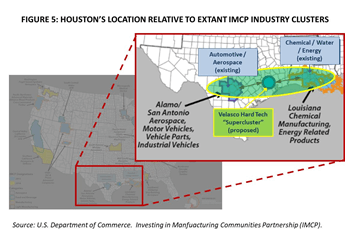 For years, many small to medium sized companies whose businesses centered on acting as suppliers to major corporations had little opportunity play a significant role in corporate R&D processes, due, among other reasons, to the prohibitively high cost of establishing meaningful R&D programs and corporate secrecy around such in-house R&D initiatives.  The automotive industry’s success in supercharging its R&D efforts through reliance on its supplier network offers an attractive template for how this model might be successfully scaled to other Hard Tech industries.  As noted by PriceWaterhouseCoopers in 2014, “Being truly innovative – having the know-how to generate ideas and the resources and business acumen to make them a reality – is a part of doing business in the constantly changing automotive industry. The days of simply being a commodity supplier to the world’s OEMs are vanishing rapidly…” By providing a discrete location where students, entrepreneurs, small-to-medium sized business owners can interface with and support institutionally led Collaborative R&D initiatives, Houston stands to strengthen and preserve the entrepreneurial verve and small business opportunity sets that have served as the foundation for the Houston business community’s reputation for innovation excellence throughout its history.

For the City of Houston, encouragement of participation from small and medium sized suppliers holds the potential to catalyze new business formation, offer opportunities for low-tech legacy businesses to chart paths towards a tech forward future, and expand the supply of innovation focused internships, apprenticeships, and job retraining programs.  Suppliers survive by producing a small number of specialized products requiring a high degree of skill and expertise.  However, they thrive when they efficiently access R&D, equipment and facilities necessary for the testing and production of advanced products within their areas of specialization.  In order to remain competitive in this increasingly complex and demanding role, suppliers must increasingly rely upon and make use of local networks of researchers, facilities and industry experts – within their local ecosystems.  TI believes that by providing suppliers access to the necessary advanced tools, equipment, and Collaborative R&D opportunities, suppliers will play a vital role in invigorating and strengthening Houston’s R&D ecosystem.

Solution #3. Serve as a Anchor Role Model for Houston’s Innovation

Increasingly, tech forward consumers, residents, entrepreneurs, businesses and corporations are demanding that the cities they choose to call home adhere to the highest environmental and sustainability standards.  As a result, cities aiming to establish and/or retain 21st Century global relevance are increasingly seeking to not only to implement green and/or sustainable technologies, but also to establish discrete physical centers showcasing a firm commitment to green and sustainable principles designed to permeate the fabric of the city’s urban core and regional community.  Increasingly, out-of-state and/or international entrepreneurs, corporations and institutions seeking to establish appropriate locations for their innovation initiatives judge the suitability of a particular city not just on the basis of dollars and cents, but rather on visibly demonstrable signs of the city’s capacity for integrating historical businesses with modern, tech forward concepts incorporating green and sustainable thinking.

While Houston has made significant strides in environmental practices and sustainability in recent years, the international community has not fully embraced Houston’s efforts in that regard.  For example, a 2016 study promoted by National Geographic / Arcadis ranked Houston #68 for environmental sustainability out of the top 100 global cities, with particular poor rankings on environmental risks (see Figure 6).  A 2018 ranking of the top 100 U.S. metropolises disappointingly ranked Houston #80 in green and/or clean energy practices.

Other cities like Chicago, Los Angeles and San Francisco have successfully used innovation centers as part of their plans for developing and differentiating areas within the city and to attract outside resources and new tenants from other regions. TI believes that Velasco represents an opportunity to establish a discrete physical “living lab” demonstration zone showcasing the creative ways in which City of Houston is reimagining how each of the “live-work-play” components of life can be integrated with, and improved through, green and sustainable thinking.  In fact, East End and Second Ward is in a unique position, subject to proper stewardship and networks, to catalyze this sites activity across an international stage.